At Guardian Self Storage, we celebrate Kauai’s long history.

As we are lovers of Kauai history at Guardian Self Storage, here is just some information pertaining to the history of our facilities:

Our Kalapaki location is perhaps the most visible historical landmark at the Nawiliwili Harbor in Lihue, which was formerly the Nawiliwili Bulk Sugar Storage Facility. The building itself was constructed in 1949 for the processing and shipment of sugar. Today, we continue to make history as the island’s biggest single self storage facility. 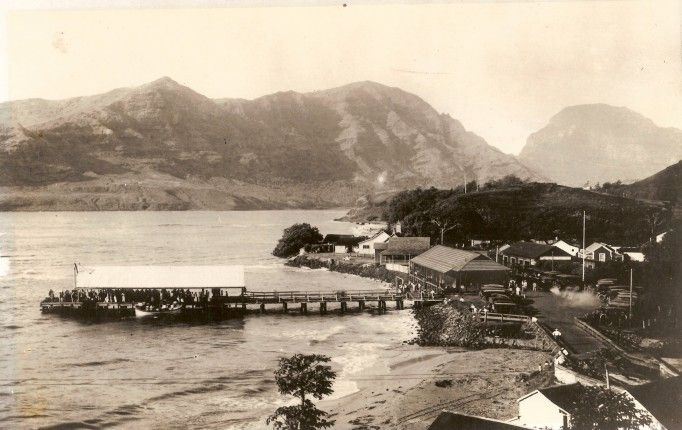 Construction of the bulk sugar facility began on August 8, 1949 by the Walker Moody Construction Company of Honolulu. Walker Moody supplied the construction labor for the project and the materials were supplied by Lihue Plantation. The Warehouse, Scale House, and conveyor system were designed by the Stephens – Adamson Manufacturing Company of Los Angeles in June 1949. This firm also designed the sugar loading gantry at the transit shed at Pier 2.

Total cost for the project was $1.25 million. Sugar from the 24,000 ton capacity Warehouse could be moved into a waiting ship at a rate of between 600 to 700 tons per hour. The transit shed at Pier 2 was constructed at the same time as the Bulk Sugar Facility system.

When it opened on May 23, 1950, the Nawiliwili Bulk Sugar Storage Facility received sugar from Lihue Plantation Co., Grove Farm Co., and Kilauea Plantation Co. The first shipment out of the plant was on August 20, 1950. 31,785 tons of sugar were shipped out of the plant during that year. The plant handled all of Kauai’s bulk sugar shipping. This amounted to as much as 200 tons per year (1990). When the sugar from several plantations was mixed at the bulk sugar plant, a system was devised that took the proceeds from the yield of sugar that was produced at the mainland refinery and distributed them to the individual plantations based on the weights and polarizations (sugar quality) of the bulk sugar when it was received at the bulk facility.

Very shortly after the Bulk Sugar Storage Facility was completed, on January 1, 1951, it was sold to a newly formed co-operative, Kauai Consolidated Terminal Company. This company was formed to pool the shipping of bulk sugar from Kauai and after its formation, it handled bulk sugar shipments from all plantations on the island thru the Nawiliwili facility.

Upon completion, the Warehouse building used two electrically powered, seventy-five horsepower crawler cranes with power shovels. These operated on the Warehouse floor to distribute the sugar falling down from Conveyor 4 above and to move sugar off the floor and in to the hoppers of Conveyor 5. By the 1980 these electric shovels had been replaced by diesel powered end loaders.

In 1973, due to inefficiencies that arose from transporting bulk sugar on the same ships and runs that hauled other goods in containers, the Hawaiian Sugar Transport Company (HSTC) was established by Matson Lines. This service operated two dedicated bulk sugar transport vessels, the Mokupahu and the Sugar Islander. HSTC moved bulk sugar from many Hawaii ports to the C & H sugar refinery at Crockett, California. Previous to the HSTC, sugar was bulk loaded on the same ship that carried containers to various other ports and the sugar companies costs included the extra traveling time. The two HSTC ships were dedicated sugar haulers in the sense that when on a sugar run from Hawaii to California they were direct, one-cargo vessels. When sugar was not scheduled for delivery, they were used to transport other bulk cargoes, often grain.

In August 2009, the cables extending the gantry boom snapped while the boom was in the horizontal position, dropping it into the hold of the ship it was loading. Two men were on the boom at the time and were injured. Because the collapsed boom was pinning the sugar ship to Pier 2 and there was an inbound passenger vessel that needed the pier for berthing, the boom was cut away from the gantry. This allowed the sugar ship, with the severed boom in its hold, to be moved from Pier 2 so the passenger ship could dock. The damaged boom was then removed from the hold. After the passenger ship had departed, a temporary sugar loading boom was rigged using the conveyor from a rock crusher. The loading of the sugar ship was completed using this makeshift conveyor. After the August incident, the rock crusher conveyor was left in place and it was used to accomplish the final shipment of bulk sugar from Kauai in November 2009. After the final shipment of sugar from this bulk sugar facility, the rock crusher conveyor was removed from the gantry. The rigging of the rock crusher conveyor would not allow the gantry to be moved back and forth along the galley to distribute the sugar evenly in the ships hold, as the intact gantry and boom had done. A bulldozer was lowered into the hold of the ship to distribute the sugar. This compacted the sugar caused problems when the ship was unloaded at Crockett, California. The normal sugar collector in Crockett could not gather the compacted sugar and it had to be excavated before the collector could gather it.

The installation of bulk sugar shipping was a cost saving measure. Although the installation of bulk storage facilities and conveyor systems were expensive, the plantation’s labor costs were reduced. There were also savings in freight charges and burlap sacks, which was not insignificant during World War II when the supply of jute (mostly from India) was sharply reduced and bag prices doubled.6 During WW II burlap sugar sacks were washed to recover any remaining sugar and reused up to five times for raw sugar shipments from Hawaii.7

The 1950 Bulk Sugar Storage Facility at Nawiliwili was the third in Hawaii. After the 1942 Kahului facility, a bulk sugar plant was completed in Hilo in 1949. The Hilo plant used four large silos as a storage facility, while the Nawiliwili and Kahului plants used warehouse buildings with flat floors and a central tunnel and conveyor running the length of the building to move the sugar out of the warehouse. Both types loaded the sugar into ship’s holds with conveyor belt systems. The Nawiliwili plant was set up to handle an average of 600 tons of sugar per hour, occasionally operating at a rate of up to 750 tons.8 Other bulk sugar plants opened in Hawaii in the following years; Honolulu in 1955, and Kawaihae in 1959.

The Nawiliwili facility operated until November 2009 when Gay & Robinson made its last sugar shipment from the harbor.

​* For sources and additional details, please refer to the original report online.

Our Puhi location sits in the Puhi Industrial Park and was built in 2006. The area had been in continuous use for sugarcane cultivation since the early 1800s and was acquired by Grove Farm in 1865. Grove Farm withdrew the land from sugar production as part of the company’s Lihue-Puhi Master Plan and developed the industrial park in 1992.

The Success of Sugar

Sugar cane was already present when Captain James Cook discovered the Hawaiian Islands in 1778. His journal notes that, even before landing, “… we could observe several plantations of plantains and sugar-canes…”. After going ashore on Kaua’i, Cook recorded, “… spots of sugar-canes, or plantains… are planted generally as a square or oblong…”. Anthropologists believe the Polynesians brought sugar cane, along with other food plants, when they voyaged to Hawai’i from other islands to the south, probably about 1000 years ago. Hawaiian and other South Pacific people did not make sugar as we know it; they simply chewed the sweet stalks.

The first recorded planting of sugar cane in Hawai’i for the purpose of extracting sugar was in Manoa Valley on Oahu in 1825. The plantation failed two years later.

The first successful sugar cane plantation was started in 1835 by Ladd and Company at Koloa, Kaua’i. Some of those lands continued to grow sugar cane until 1992 when McBryde Sugar Company gave up its lease with the Grove Farm Company due to the damage caused by Hurricane Iniki.

When the first small sugar cane plantations began to prosper, other businessmen became interested in sugar as an exportable product to bring in income for the Kingdom’s economy. The first recorded export of Hawaiian sugar was in 1837, when two tons were exported with a value of $200.

As the early sugar planters became more involved in the production of sugar, they recognized that they faced mutual problems on all four sugar islands of Hawai’i where they were growing, harvesting and milling their crops.

Many people believe Hawai’i has the “ideal” climate all year round because it is sunny and warm without being uncomfortably hot.

The Hawaiian Islands are in a trade wind zone where winds blow much of the time from northeast to southwest. These trade winds, which pick up moisture as they travel over the ocean, hit their first land in thousands of miles when they reach Hawai’i.

Sugar cane is a thirsty crop and takes two thousand pounds of water to produce one pound of sugar.

By 1980, fourteen plantations and about 550 independent sugar growers in Hawai’i used about 89,000 hectares (220,000 acres) of land for growing sugar cane and they were producing about a million tonnes (1,100,000 tons) of raw sugar each year. Most of this raw sugar was sent to the continental United States where it was refined and sold as C & H Sugar (California and Hawaii) primarily to the western and mid-western states.

Hawai’i supplied about one-tenth of the sugar used by the 215 million people in the United States in 1980.

Guardian Self Storage to complete phase two of construction at Nawiliwili

Island Self Storage to Convert Sugar Building in Kauai County

Don't take our word for it. Check-out our reviews!